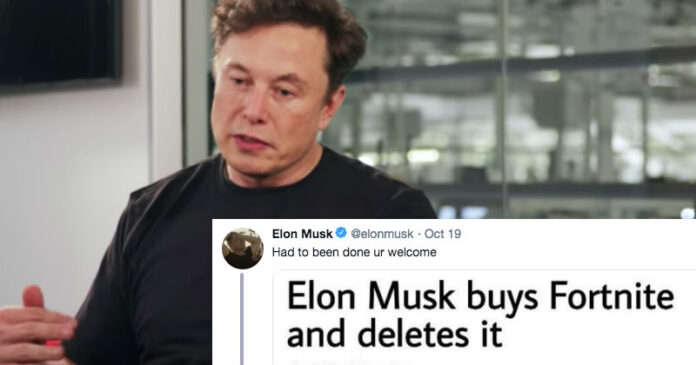 Elon Musk Buying Fortnite, What do you think?

Commonly, every 5 or 6 months, there will be any roomer or fake news on any famous personality on the internet.

So today it is time for the wealthiest person in the world, says Elon Musk Buying Fortnite. The tweet says Elon musk intends to buy Fortnite purely so he can delete it from existence.

It is not true or didn’t come from a reliable source. The tweet has come from a meme created as a joke in October 2018.

A Reddit user named The-shadowxz, on October 19, 2018 posted a screenshot of a MarketWatch news story.

He posted “Elon Musk buys Fortnite and deletes it”. The post featured the name Mike Murphy, who is the real MarketWatch contributor.

All the reach for the post was indirectly boosted by Elon Musk, who, the day after it was posted, played along with the joke, by commenting on the screenshot, “Had to been done ur welcome.”

This comment suggests that Elon agreed with the quote which he used as a subheader, “I had to save these kids from eternal virginity,” but he never really said it.

So, to all the people sitting and staring at the tweet, back off to your daily lives and work. The tweet, Elon Musk Buying Fortnite is not true and will never become so.

For instance, at the time of the Fortnite Black Hole event on October 2019, when all the official Fortnite channels went enormously dark.

Many people and fans took that as a sign of Elon Musk buying Fortnite and deleting it, which is fake.

The rest of the people admitted, that, he hasn’t, he isn’t about to, and he never will.