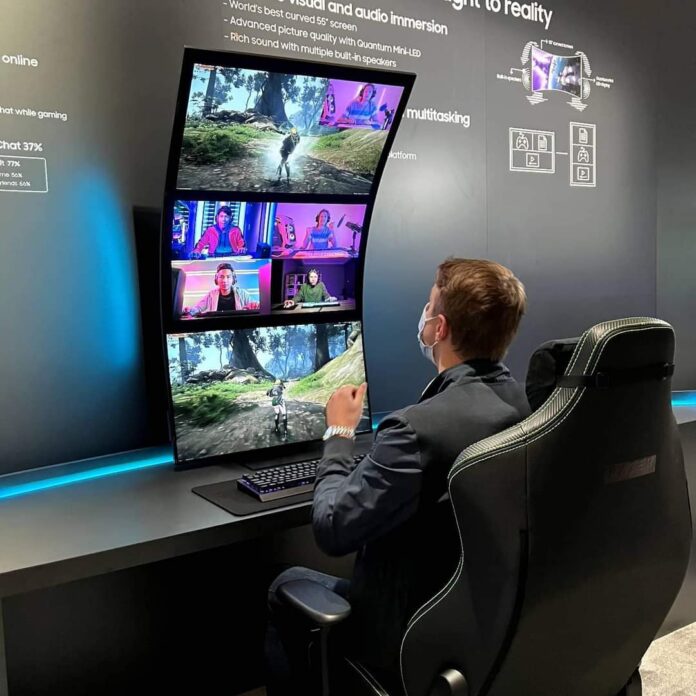 All-new Samsung ARK for gaming lovers is coming. Samsung has never disappointed us with its new projects, whether it be a television, PC, or any other tech device.

It has given its best to let remain the reliability in us, with the same now it has come with another exciting launch for all the gaming lovers there.

New SAMSUNG ARK is Going to Change Everything for Gamers Samsung has recently announced its launch of the new Odyssey Ark, one of its kind, with a 1000R rotating curved gaming screen, which is a large 55-inch.

“We are giving today’s gamers what they want- more of a cinematic and immersive experience- with innovations in gaming display technology that only Samsung can deliver”, said Harry Patz.

In addition to that, the all-new Odyssey Ark gives an awesome and mind-blowing experience for all gamers through its new way of the game across consoles and PC.

The all-new Ark is coming with Samsung’s Quantum Mini LED Technology, with a newly added 14-bit processor and a well-developed light control so gamers can see both dark and bright sides.

The Matte Display enables both Anti-glare and Anti-reflection which ensures gamers are focused on the content opposite to them.

The sound system includes Sound Dome Tech with AI Sound Booster and Dolby Atmos to get a great experience of sound to them.

The four speakers are placed eventually, one at each corner, and two central woofers emit a real-time sound experience, all thanks to the 60W. This separates the ARK from the others.

Wholesome is a new trial by the Samsung company coming in the coming few months, said Samsung Australia. Although the company hasn’t mentioned the price yet but keeping the specs in mind it is anticipated to be an expensive product, so it would become easy for gamers to start saving their money.